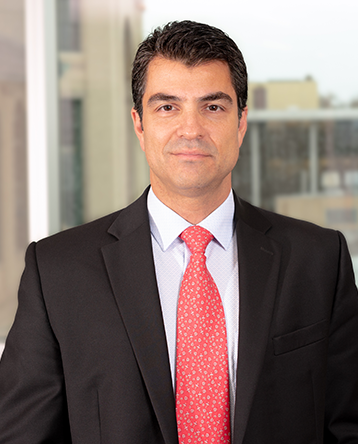 Burak Ozdoganlar is currently Ver Planck endowed chair professor of Mechanical Engineering and the associate director of the Engineering Research Accelerator. He also holds courtesy faculty positions in Biomedical Engineering and Materials Science and Engineering. Ozdoganlar received two M.S. degrees from The Ohio State University in 1993 and 1995, and his Ph.D. degree in mechanical engineering from the University of Michigan in 1999. Before joining Carnegie Mellon in 2004, he held positions at the University of Illinois at Urbana-Champaign as a postdoctoral research associate, and at the Sandia National Laboratories as a senior member of technical staff.

He has co-authored more than 90 archival journal articles and more than 110 conference articles. He previously served as an associate technical editor for ASME J. Manufacturing Science and Engineering, and for the Society of Manufacturing Engineers (SME) J. Manufacturing Processes. Since 2008, he has been a member of the Scientific Committee of North American Manufacturing Research Institution of SEM.

Ozdoganlar has also been active in professional societies: he is a Fellow of ASME, a founder and past-president (2011-2012) of the International Institution of Micro Manufacturing (I2M2), and he is a former chair of the ASME-MED manufacturing equipment technical committee. He was also an interim CTO and then the Chief Scientist of ARM (Advanced Robotics for Manufacturing Institute), a ManufacturingUSA institute. He is a member of the Phi Kappa Phi and Sigma Xi honor societies, SME/NAMRI, ASME, and ASEE. His recent awards and recognitions include the 2011 ASME Blackall Machine Tool and Gage Award; the SME 2007 Outstanding Young Manufacturing Engineer award; the 2006 NSF/CAREER award; the 2008 NAMRI/SME Outstanding Paper award; and the Russell V. Trader Career Faculty Fellowship at CMU (2009-2011).

The video of a new 3D ice printing method developed by Carnegie Mellon engineers is magical according to Additive Manufacturing Media. Read about how mechanical engineering faculty Burak Ozdoganlar and Philip LeDuc and Ph.D. student Akash Garg are printing sacrificial structures that are as small as blood vessels.

Scaling up the production of liquid metal circuits

At Carnegie Mellon, mechanical engineering researchers have developed a new scalable and reproducible manufacturing technique that could accelerate the mainstream adoption and commercialization of soft and stretchable electronics.

3D printed ice isn’t as magical as in the movie Frozen, but it has wonderful potential for biomedical engineering and advanced manufacturing.

MechE’s Burak Ozdoganlar was featured as a webinar speaker and round-table discussion panelist hosted by the National Academy of Engineering. He shared his research on hybrid microneedle array systems and their potential for improving vaccine delivery.

A research project lead by MechE’s Burak Ozdoganlar was featured in Medical Plastics News, explaining how 3D printing microneedles could radically change world's response to vaccine distribution for the coronavirus.

Collaborators are developing a novel approach to inoculation that addresses both immunological effectiveness and manufacturing efficiency.

Improving a vaccine delivery system for COVID and beyond

To impact COVID-19 vaccination in the developing world, collaborators develop and test a new hybrid microneedle array platform capable of delivering vaccines directly into the skin.

At home with research

Despite the coronavirus shutdown, researchers and students were creative about continuing their work and joining the fight against COVID-19.