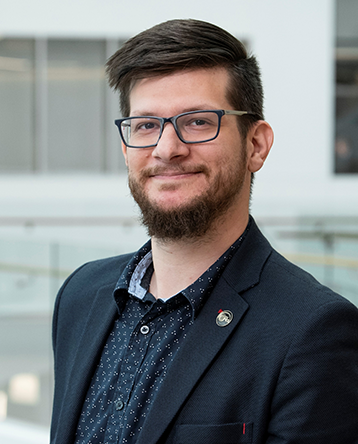 Panayiotis (Panos) Moutis, joined the Scott Institute for Energy Innovation at Carnegie Mellon University in August 2018, following his appointment as a postdoctoral research associate in the Electrical and Computer Engineering Department at Carnegie Mellon (Feb. 2016). In his role as systems scientist with the Institute, he has been conducting research on various smart grid applications and paradigms for the management and control of electric power systems, while also offering special topic courses on similar subjects.

In 2014, he was awarded a fellowship by Arup UK (through the University of Greenwich) on the “Research Challenge of Balancing Urban Microgrids in Future Planned Communities,” whereas in 2013 he won the “IEEE Sustainability 360oContest” on the topic of Power. Between 2007 and 2015, as part of the SmartRUE research group, he contributed in over a dozen R&D projects funded by the European Commission. Panos received both his diploma (2007) and his Ph.D. (2015) degrees in electrical and computer engineering at the National Technical University of Athens, Greece. He has published more than 20 papers and has accumulated over 10 years of experience as a technical consultant on projects of Renewable Energy Sources and Energy Efficiency.