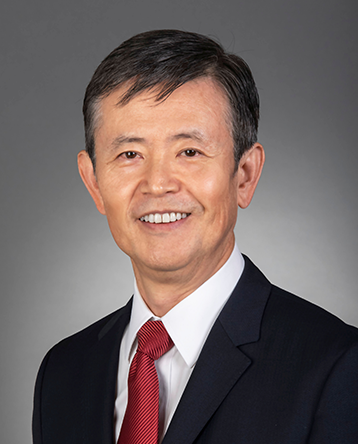 Hyong Kim has been at Carnegie Mellon University since 1990 where he is currently the Drew D. Perkins Chaired Professor of Electrical and Computer Engineering. He received the B.Eng. (Honours) degree in electrical engineering from McGill University, and the M.A.Sc. and Ph.D. degrees in electrical engineering from the University of Toronto. His primary research areas are advanced switch architectures, fault-tolerant, reliable, and secure network and computer system architectures, and distributed computing and network management systems. His Tera ATM switch architecture developed at CMU has been licensed for commercialization to AMD and Samsung. In 1995, Kim founded Scalable Networks, a Gigabit-Ethernet switching startup. Scalable Networks was later acquired by FORE Systems in 1996. In 2000, Kim founded AcceLight Networks, an optical networking startup, and was CEO of AcceLight Networks until 2002. He founded and directed CyLab Korea, an international cooperative research center at Carnegie Mellon University, from 2004 to 2008. He is an author of more than 130 published papers and holds more than 10 patents in networking and computing technologies.

A group of Carnegie Mellon – CMKL | Thailand researchers is developing a software to optimize logistics operation and detect anomaly based on large data.

A team from Carnegie Mellon – CMKL | Thailand won Best Paper at the IEEE International Conference on Blockchain 2019 in Atlanta, Georgia in July 2019 for their paper, “TendrilStaller: Block Delay Attack in Bitcoin.”

CMU and KMITL to launch collaboration