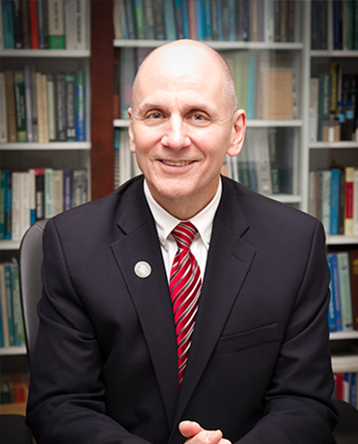 David Dzombak is the Hamerschlag University Professor and head of the Department of Civil and Environmental Engineering at Carnegie Mellon. The emphasis of his research and teaching is on water quality engineering, sustainable water resources, and energy-environment issues. At Carnegie Mellon he also has served as associate dean for Graduate and Faculty Affairs for the College of Engineering (2006-2010), as director of the Steinbrenner Institute for Environmental Education and Research (2007-2013), and as interim vice provost of Sponsored Programs (November 2012-August 2013).

Dzombak's professional service activity has included membership in the EPA Science Advisory Board (2002-2016); the DoD Strategic Environmental Research and Development Science Advisory Board (2013-2016); the National Academies Roundtable on Science and Technology for Sustainability (2013-present); the National Research Council (various committees, 2000-present); Editorial Advisory Board for ACS Sustainable Chemistry & Engineering (2012-2016); associate editor of Environmental Science & Technology (2005-2012); Editorial Board of Water Environment Research (1993-1998) and Ground Water (1991-1993); chair, Board of Directors, AEESP Foundation (2012-2014); Board of Directors and Officer (Treasurer) of the Association of Environmental Engineering and Science Professors (1996-1999); chair of committees for the American Academy of Environmental Engineers, American Society of Civil Engineers, and Water Environment Federation; and advisory committees for Allegheny County, the Commonwealth of Pennsylvania, and numerous universities and organizations.

CEE Head David Dzombak was quoted in the The Pittsburgh Post-Gazette about how the changing climate will affect Pittsburgh’s infrastructure.

A (climate change) tale of 115 cities

Climate change is happening, but the details of how can vary greatly, which makes planning for the future a challenge. A new, open dataset contains climate histories of more than 100 U.S. cities, showing the unique changes each city has been through, and hinting at what might lie ahead.

Dzombak on climate change and infrastructure

CEE Head David Dzombak was interviewed for the Hard Facts podcast about how engineers are changing methods to design and build infrastructure in the wake of climate change.

The American Society of Civil Engineers

CEE Head David Dzombak recently spoke with the Fort Worth Star-Telegram about the city’s 15-year $1.17 billion Panther Island project that would help control flooding and create thousands of acres of new real estate.

CEE’s David Dzombak and Costa Samaras received awards from the Pittsburgh Section of the American Society of Civil Engineers during its 2019 Engineers’ Week Banquet.

Penn State researchers found a way to use chemical signatures to differentiate between natural methane leakage and methane that leaked as a result of fracking. CEE Head David Dzombak, while impressed, says we need to do more to understand the impact of fracking on ground and surface water. He suggests that government, industry, and scientists should work together on prospective studies throughout the life cycle of a well.

The Incline quoted CEE Head David Dzombak on the planned addition of orthophosphates to Pittsburgh's water supply. Dzombak addressed health and environmental concerns and said that orthophosphates have proven effective in other cities.

Where is the Southwest getting all of its water?

David Dzombak and student Kerim Dickson surveyed and mapped Interbasin Transfers throughout the country to assess how cities might adapt their water supply routes to the stresses of climate change.

US infrastructure is stuck in the past.

The plan must look to the future.